I've been feeling kind of down lately. I'm not sure if it's because I haven't been able to get out much or stress from other areas in my life. My knee is healing well, I got the stitches out yesterday. I've gotten some other strengthening exercises from the physio to do as well.

Milo went back to the vet. Both his back paws are infected. Just a few weeks after they had cleared up :/. We must seem like pretty awful puppy parents. I think it might be a new food allergy developing, we will likely have to re-test.

I worked with some femo clay. I'll post pictures once I paint it.
Posted by Emma W at 20:16 No comments:

I'm doing alright. I was able to get around the apartment today with out a problem. Other than kneeling, I still can't kneel. Or squat. My knee is still inflamed, but it isn't painful. A bit achey. My back is actually starting to hurt more than anything, not being able to squat or kneel means I need to bend my back more to pick up things. So i've been having some back spasms, which is no fun.

On a lighter note, i've almost finished up one of my big projects for the semester. Yay for botany! I'm still behind in my notes, but I figure i'll do an hour or two a day and I should be able to make it up.

Not much to update on. My days have been pretty much the same. Still swollen, still bruised. I can walk around a bit better, stairs are still hard though.
Posted by Emma W at 18:57 No comments:

*SURGICAL IMAGE WARNING* I'm going to post a picture of my knee post-op without the bandage.

I haven't updated lately because my days have been similar. Rest, ice, tell Milo to stop barking, sleep, repeat. I have been healing though, i've been able to put more weight on my leg each day. I used two crutches, then one crutch, now i'm hobbling around without anything at home but used my cane when I went to see the doctor. Speaking of my GP, they didn't even send her the report! She didn't even know I had surgery until I said "well, i'm here to get my bandages off...". Lol. And what a relief it was to get them off! Wanna see a picture? 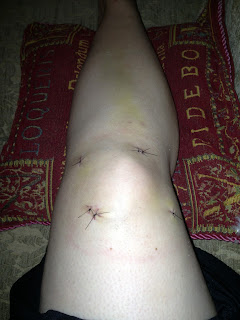 It's pretty bad quality...but basically my knee is inflamed and brused everywhere. It doesn't hurt much though, the feeling is like it's bruised. Which it is. And like I can't bend it all the way. And a bit achey. But compared to sciatic pain, it's nothing! I'm not sure why i'm bruised farther down the leg, maybe the surgeon was leaning on it? I'll have to ask next week. The stitches are prickly. My wrists are also getting quite sore. Whether from being on the compy/phone, arthritis flaring, or from holding my self up on counters and crutches i'm not sure.

In other news, i've started the second book in the A Song of Ice and Fire series. I'm trying to catch up with the tv show (which is on season three, I think it would be around book three?) but it's slow going. I don't think I read as quickly on the computer as I do a physical book. Strange?

I'm able to put more weight on my leg as time goes on, tomorrow I think i'll be able to walk with just one crutch. While my knee hasn't been more painful, it has felt more inflamed today. I've spent most of the day reading A Game of Thrones. I'll likely finish it off tomorrow. I really need to start working on my projects and tutorials >.>... 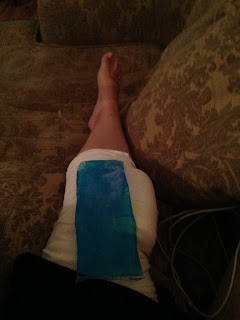 My leg with an icepack,
the bandages are already starting to look ragged 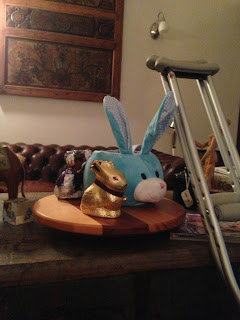 The lovely easter basket and chocolate bunnies my MiL left us :)
You may notice that both the bunnies already have their ears eaten...
Posted by Emma W at 20:28 No comments:

It's been a long day. Bran, Milo, and I are house sitting for my MiL. This also includes watching after the adorable old shar pei MiL adopted, he's no trouble really but it's all extra work for Bran!

I've been extraordinarily tired today. I took a little nap this morning and i've just been resting most of the day (other than packing up a little and getting in and out of the car). Pain levels are ok, though the fibro pain is acting up a bit. I feel like my hips and shoulders are bruised, even though they aren't at all.

I've also started reading A Game of Thrones, it's following the series so far, but I like having all the extra details :).

Here is a pic of my leg, this time on a different couch! 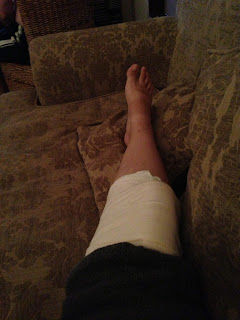 I was on my own today. Not my favorite. I'm feeling much more tired and ended up taking a three hour nap in the middle of the day. Though on a good note, I was able to take a shower (on my little stool) without getting the bandage wet. It's nice to have clean hair :). I've been putting a bit of weight on my leg now as well, I haven't had any endone today so I can see exactly how much pain i'm in. Keeping in mind i'm on slow release panadol, but it's pretty bearable.  I'll take some endone tonight to help with sleep but I should be able to go without it soon. Took the brace off today as well, honestly I think it was more cumbersome than helpful to begin with. My wrists and shoulders are sore though...Here are some pictures! 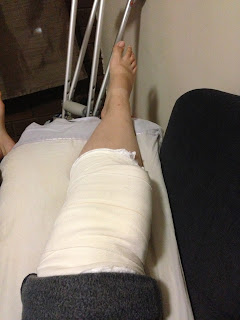 My leg without the brace, you can see crutches in the background 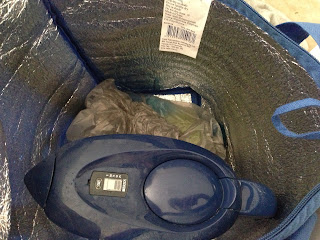 I kept water and ice packs in an insulated bag next to the couch, handy! 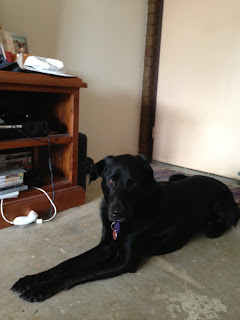 Milo keeping watch, he isn't impressed with my photography skills 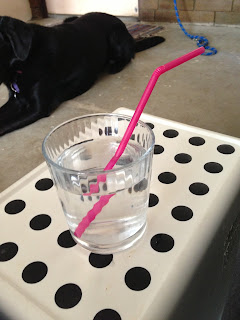 Little stool with non-slip spots on it, handy for couch-side table and showering
Posted by Emma W at 19:34 No comments:

Emma W
I'm an American living in Brisbane, QLD Australia with my Aussie husband where I attend university to study Naturopathy. I love to cook, be artsy, and be with my husband and pup. I am also living with an autoimmune disease called psoriatic arthritis along with fibromyalgia and a damaged sciatic nerve. It's all sorts of fun, which I blog about frequently. I often try different approaches in dealing with pain and the problems that come along with chronic illness and write about what has helped and not helped. This is for both for my own information and in the hope that someone else may benefit.